In May 2022, the New Civil Liberties Alliance and the attorneys general of Missouri and Louisiana (Eric Schmitt and Jeff Landry) sued1 President Biden for illegally colluding with social media companies to suppress Americans' First Amendment rights to free speech, and to ban or deplatform those who shared unauthorized views about COVID and vaccines.

In early October 2022, after the discovery process revealed the names of federal officials actively engaged in behind-the-scenes censoring of Americans, dozens of defendants were added to the lawsuit, bringing the total number of named defendants to 67.2,3 As reported by the New Civil Liberties Alliance September 1, 2022:4

Under the First Amendment, the federal government may not police private speech nor pick winners and losers in the marketplace of ideas. But that is precisely what the government has done — and is still doing — on a massive scale not previously divulged."

Background on the Case

However, executive privilege does not apply to external communications, so in early September 2022, Judge Terry Doughty rejected the Biden administration's claim of executive privilege and ordered the White House to hand over any and all relevant records,5,6 including correspondence to and from Fauci.

October 21, 2022, the court also authorized7 expedited depositions of eight key federal officials named in the 'case,' Fauci included.8,9 The DOJ then asked the judge for a protective order to keep videotaped depositions under seal,10 effectively demonstrating that it's onboard with these unconstitutional activities.

In the end, the depositions were not kept secret. Fauci's deposition took place November 23, 2022,11and the full transcript12 was released December 5.13 In a December 5, 2022, press release, Schmitt stated:14

"Missouri and Louisiana are leading the way in exposing how the federal government and the Biden Administration worked with social media to censor speech. In our deposition with Dr. Fauci, it became clear that when Dr. Fauci speaks, social media censors.

I encourage everyone to read the deposition transcript and see exactly how Dr. Fauci operates, and exactly how the COVID tyranny that ruined lives and destroyed businesses was born."

"Fauci's recent deposition only confirmed what we already knew: federal bureaucrats in collusion with social media companies want to control not only what you think, but especially what you say.

Ironically, Fauci, who last year claimed16 to be the personification of science itself and whose statements could not be challenged or questioned, suddenly could not recall much of anything and even claimed he's unqualified to speak on certain issues related to the virus, as seen in the extract below. 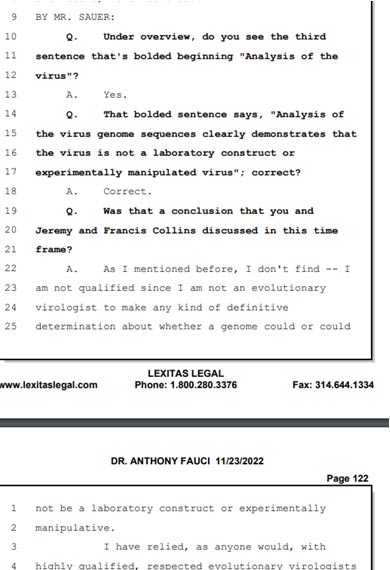 According to the transcript, Fauci answered questions with "I don't recall" 174 times. He also claimed he didn't know key collaborators and was only vaguely familiar with projects he funded at the WIV, the lab in or from which the COVID-19 pandemic appears to have originated. As noted by Justin Goodman with the White Coat Waste Project:17

"What really jumped out at me … is that in the deposition Fauci definitively states at numerous points that it is 'impossible' that the animal experiments that he funded in Wuhan could have sparked the pandemic.

At the same time, he claims he's only 'vaguely familiar' with the project he was funding there and that he barely knows the key players, including Shi Zhengli, Peter Daszak, Ralph Baric and EcoHealth Alliance. He can't have it both ways."

Indeed, how can Fauci have almost no insight into the research he funded over the years yet be "certain" that none of it resulted in the creation of SARS-CoV-2?

Since February 2020, I've been keeping my readers abreast on the ever-mounting evidence showing SARS-CoV-2 was manmade, and possibly the result of intentional bioweapons development. A number of those articles are shown in the video below, posted on Twitter by a user named NOBODY AF.

The possibility that SARS-CoV-2 might have been created using a process known as serial passaging through mice with human ACE2 receptors has been raised several times since then.18 It's one way in which you can give a virus new abilities without resorting to gene editing.

"Exactly!" Farrar replied. Fauci was obviously surprised that such experiments had taken place in a biosafety 2 lab (BSL-2) in Wuhan, to which Farrar replied "Wild West," an indication that the research industry, which wants to regulate itself, is out of control, conducting risky experiments in labs that aren't set up to handle dangerous pathogens. 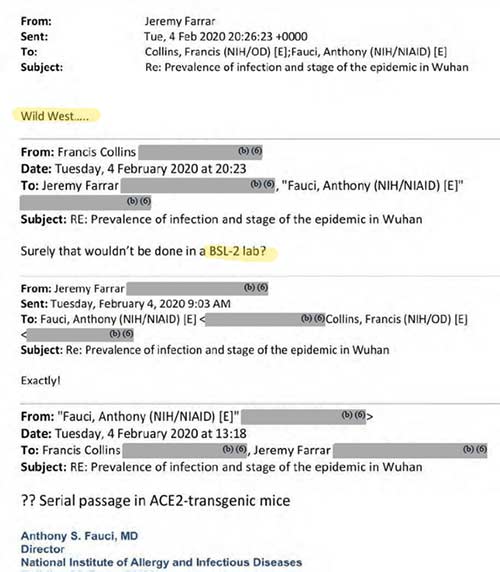 The implication here is that doing gain of function research in a level 2 lab massively increases the risk of that pathogen escaping, as BSL-2s do not have the proper containment measures. Yet, mere days later, in an interview with Newt Gingrich, Fauci flatly rejected claims that there were concerns about the safety practiced at the Wuhan lab, calling it "a conspiracy theory."19

In January 2021, the U.S. State Department released a fact sheet20 on the Wuhan lab, based on classified materials, which again raised questions about safety at the Wuhan lab.

According to this report, "Scientists in China have researched animal-derived coronaviruses under conditions that increased the risk for accidental and potentially unwitting exposure." The report also noted that the WIV was engaged in classified research on behalf of the Chinese military, and that the lab had "not been transparent or consistent about its record of studying viruses most similar to the COVID-19 virus."

Fauci was also deposed about his suppression of The Great Barrington Declaration, which called for focused protection of the vulnerable and isolation of those infected rather than nationwide lockdowns. Focused protection has been a longstanding basic principle of public health that we've followed for decades.

Emails reveal Fauci and Collins colluded behind the scenes to quash the declaration from Day 1, and since they couldn't defend lockdowns based on science, they resorted to propaganda, PR and smear tactics instead. In an October 8, 2020, email to Fauci, Collins wrote:21,22,23,24

"Don't worry, I got this," Fauci replied. Later, Fauci sent Collins links to newly published articles refuting the focused protection solution, including an op-ed in Wired magazine, and an article in The Nation titled "Focused Protection, Herd Immunity and Other Deadly Delusions."

In his deposition, however, Fauci suddenly could not recall how or when he became aware of the Declaration. 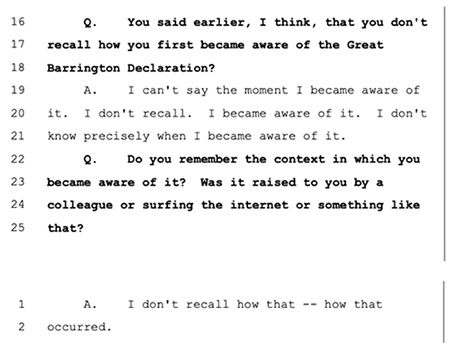 When confronted with Collins' October 8 email, Fauci could only "vaguely" remember getting the email, and could not recall whether he'd actually read the Declaration, which Collins linked to.

Either way, Fauci claimed the Declaration had been of little interest to him. "I wouldn't imagine that I would be overwhelmingly interested," Fauci said. He also couldn't remember if he'd ever responded to Collins' email, even though he'd promised Collins to take care of the problem, and later sent links to propaganda articles that tried to debunk focused protection.

When asked, "Do you know what he's referring to when he talks about a quick and devastating takedown?" Fauci replied "I do not know what he's referring to. I would imagine I was thinking that someone would take the counterargument of what the premise was … I don't know specifically what he meant … He's likely talking about writing a scholarly article to contest some of the premises … That would be his style."

Collins, however, never composed a scholarly article to counter the focused protection argument. Instead, mainstream media suddenly published articles that were critical of it — after Fauci told Collins, "I got this."

When the American Institute for Economic Research (AIER) recently filed a Freedom of Information Act (FOIA) request with the NIH for Fauci's correspondence about The Great Barrington Declaration with British counterparts, they received 61 pages of emails, 58 of which were completely redacted.25Clearly, the NIH does not want to admit to whatever was said in those emails.

"(2ND FOIA) request was for Anthony #Fauci's correspondence with his counterparts in Great Britain during the period of the lockdown & #GreatBarringtonDeclaration.

They gave us 61 pages, 58 of them are COMPLETELY REDACTED." @PhilWMagness @aierpic.twitter.com/AxQKolVOxO

In a December 8, 2022, article,26 U.S. Right to Know (USRTK) reviewed emails showing EcoHealth Alliance president Peter Daszak played a central role in the creation of the public messaging about COVID-19's origin and "helped steer the media and scientific community away from questions about whether COVID-19 could have originated in a lab."

This is notable, considering Daszak was the middleman who funneled funding for gain of function research on coronaviruses from the National Institutes of Health (NIH) through the EcoHealth Alliance to the WIV. USRTK writes:27

"Emails between Daszak and University of North Carolina virologist Ralph Baric, another collaborator of the laboratory at the pandemic's epicenter, offer new behind-the-scenes insights into Daszak's influence.

Baric's experiments with the Wuhan lab included gain-of-function experiments to make viruses more transmissible or virulent. The White House was dissuaded from investigating the possibility of a lab origin of COVID-19 in part by discussions that included both Daszak and Baric, according to a March 2020 email28 written by Daszak.

And in a separate May 2020 email,29 Daszak told Baric that he used talking points intended to discourage reporters from asking questions about potential gain-of-function work on coronaviruses …

These new revelations add to the evidence of Daszak's central role in shaping public perceptions about COVID-19's origins. He secretly30 organized a statement31 in the prestigious medical journal The Lancet deeming a lab origin a 'conspiracy theory.'

He served as the U.S. representative on the 2021 World Health Organization origins investigation in China, which dismissed a lab origin as 'extremely unlikely.' He also formerly chaired a Lancet Commission probe into the origins of COVID-19 which was disbanded after Daszak declined to share his grant reports …

'I don't think this committee will be getting into the lab release or bioengineering hypothesis again any time soon — White House seems to be satisfied with the earlier meeting, paper in Nature and general comments within [the] scientific community,' Daszak told32 Baric."

In a May 6, 2020, email,33 Daszak also coached Baric on how to deflect and steer questions about gain of function research that might have contributed to the creation of SARS-CoV-2. Daszak said he would "practice lines" to deflect and change the topic to natural spillover.

While the U.S. Constitution guarantees certain rights, including the right to free speech, this inviolable law of the land has not been able to prevent encroaching tyranny, thanks to the fact that those charged with adhering to it and upholding it aren't doing their jobs. They're blatantly snubbing their noses at it, pretending as though it doesn't exist.

While the U.S. Constitution clearly forbids government censoring and restricting free speech, HR. 8752 could be a helpful enforcement tool, as people might tend to think twice when they know there's a real price to pay.

While the U.S. Constitution clearly forbids government censoring and restricting free speech, HR. 8752 could be a helpful enforcement tool — and we clearly need enforcement — as people might tend to think twice when they know there's a price to pay, both personally and financially. If you agree, call on your representatives to back HR. 8752.