By now, you probably understand the importance of hand-washing to prevent the spread of infectious illness. But did you know flushing your sinuses might be an even better way to inhibit the progression of a viral illness such as COVID-19? In an April 20, 2020, article,1 Best Life features the recommendations of Dr. Amy Baxter, a pediatric emergency medicine physician in Atlanta, Georgia.

Nasal irrigation, she says, is a rarely discussed strategy that can help reduce the progression of illness in those who have tested positive for COVID-19 infection. In an April 2, 2020, response2 to a BMJ paper about the lack of personal protection equipment on COVID-19 frontlines, professor Robert Matthews also brought up the importance and potential usefulness of oropharyngeal washing to protect health care workers from infection. As reported by Best Life:3

"Nasal irrigation, or a nasal wash, has long been considered an effective way to remove viruses or bacteria from sinus cavities.

According to Baxter, recent clinical trials show that nasal irrigation reduces the duration and symptoms for other viral illnesses like flu and the common cold, though it hasn't yet been studied for COVID-19. Still, she has multiple reasons for believing that this approach can be effective in preventing coronavirus from worsening in a sick patient."

As noted by Baxter, researchers have found that the viral load of SARS-CoV-2 tends to be heaviest in the sinuses and nasal cavity. Regularly rinsing your sinuses therefore makes sense since it would help clear out the pathogen and prevent it from gaining a strong foothold and migrating into your lungs.

The age and gender discrepancies observed in COVID-19 also supports nasal irrigation. Children are at virtually no risk from COVID-19, while death rates among the elderly are at their highest. More men than women also die from the infection.

"Children don't develop full sinuses until teens; males have larger cavities than women, and the cavities are largest [in those] over 70 years," Baxter notes.

Research has previously demonstrated that nasal irrigation reduces the symptoms and duration of other viral illnesses such as the seasonal flu and common cold.

In one randomized controlled trial,4 nasal irrigation and gargling with hypertonic saline were found to reduce the duration of the common cold by 1.9 days and reduce transmission within the household by 35% by reducing viral shedding when done within 48 hours of symptom onset.

While it has not yet been studied as a preventive method for COVID-19 specifically, there's reason to suspect nasal irrigation might be helpful.

Baxter points out that COVID-19 death rates in Southeast Asian countries such as Thailand, Vietnam and Laos have been surprisingly low, and nasal irrigation is common practice in those areas. According to Baxter, some 80% of the Southeast Asian population do it.

How to Irrigate Your Sinuses

Baxter suggests irrigating your sinuses any time you've been exposed to an infected individual or test positive for COVID-19. She recommends flushing your sinuses in the morning using a mixture of boiled lukewarm water (8 ounces) and povidone-iodine (half a teaspoon).

Povidone-iodine has been shown to effectively kill not only Klebsiella pneumoniae and Streptococcus pneumoniae bacteria, but to also rapidly inactivate SARS-CoV, MERS-CoV, H1N1 influenza virus A and rotavirus after 15 seconds of exposure.5

The mixture used in this study: 7% povidone-iodine diluted 1-to-30, which equates to a total concentration of 0.23% povidone-iodine, inactivated over 99% of the coronaviruses causing SARS and MERS.

Gargling May Also Be Helpful

You may also be able to reduce the risk of SARS-CoV-2 migrating into your lungs by gargling. As noted by Dr. Neal Naito in a March 29, 2020, New York Times article,6 while there's "no firm proof" that gargling can prevent COVID-19, there are virtually no downsides to the advice.

Like Baxter, Naito points out that many East Asian countries such as Japan see gargling as a commonsense hygiene practice.

"In East Asia, particularly in Japan, gargling is strongly encouraged by the national government, along with other practices like hand-washing, wearing face masks and social distancing, as a matter of routine hygiene during the regular cold and flu season.

(Not everyone, though, can gargle effectively, including some people with neck pain, stroke or dementia, as well as children generally under the age of 8.) Most of the early studies7 suggesting that gargling may help to prevent and treat upper and lower respiratory infections, not surprisingly, come from Japan," Naito writes.

An over-the-counter povidone-iodine8 oral gargle solution, used for decades by the Japanese for the treatment of sore throat, appears most useful. One small study9 from Japan, published in 2002, found patients diagnosed with chronic respiratory disease who gargled with a povidone-iodine solution at least four times a day reduced their incidence of acute respiratory infection by about 50%.

Do Not Use Iodine-Based Skin Disinfectant for Gargling

Importantly, Naito stresses that povidone-iodine solutions sold as skin disinfectants are NOT suitable for gargling as they contain potentially harmful ingredients that should not be ingested.

"It's critical that people not gargle with skin disinfectant solutions, including those that contain povidone-iodine," he says. So, when using povidone-iodine for gargling, be sure to look for solutions such as Betadine formulated specifically as a sore throat gargle, not products intended for cuts and wound care.

While gargling and nasal irrigation may certainly be useful, I believe nebulizing hydrogen peroxide or colloidal silver may be even more effective. Dr. Thomas Levy10 has issued guidance11 on how to use nebulized hydrogen peroxide for the prevention and treatment of viral respiratory infections, including COVID-19.

Within one minute of exposure, 0.5% hydrogen peroxide effectively inactivated a range of human coronaviruses, including those responsible for SARS and MERS.

To inactivate viruses with hydrogen peroxide, all you need is a face mask that covers your mouth and nose and a nebulizer that emits a fine mist with properly diluted food grade hydrogen peroxide.

Typically, food grade peroxide comes in concentrations of 12%, which must be diluted down to 1% or less before use, as described in the chart below and video above. If you are using 3% hydrogen peroxide, then you would multiply the number in the first column by 4, or divide the second column by 4. 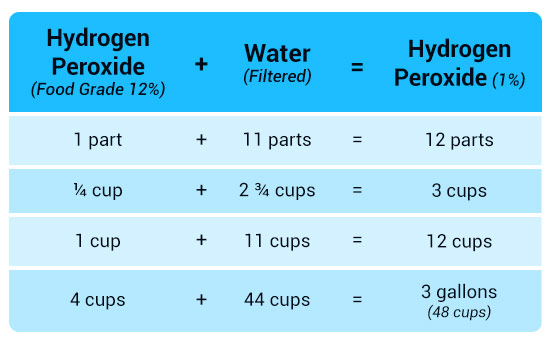 The microscopic mist, similar to smoke or vapor, can be comfortably inhaled deep into your nostrils, sinuses and lungs. Hydrogen peroxide (H2O2) consists of a water molecule (H2O) with an extra oxygen atom, and it is the additional oxygen atom that allows it to inactivate viral pathogens.

Coronaviruses are held together by a lipid (fat) envelope. Soap, being amphipathic12 — meaning it can dissolve most molecules — dissolves this fat membrane, causing the virus to fall apart and become harmless.

Hydrogen peroxide works in a similar way. You can find more details about the mechanism of action in my previous article, "Could Hydrogen Peroxide Treat Coronavirus?"

Many studies have looked into the use of hydrogen peroxide against different pathogens. One of the most relevant is a review14 of 22 studies, published in March 2020 in the Journal of Hospital Infection. They found 0.5% hydrogen peroxide effectively inactivated a range of human coronaviruses, including those responsible for SARS and MERS, within one minute of exposure.

If you're already presenting with a runny nose or sore throat, Levy recommends using the nebulizer for 10 to 15 minutes four times a day until your symptoms are relieved. You can also use nebulized hydrogen peroxide for prevention and maintenance, which may be advisable during flu season, or while the COVID-19 pandemic is in full swing. According to Levy:15

"As it is a completely non-toxic therapy, nebulization can be administered as often as desired. If done on a daily basis at least once, a very positive impact on bowel and gut function will often be realized as killing the chronic pathogen colonization present in most noses and throats stops the 24/7 swallowing of these pathogens and their associated toxins.

If daily prevention is not a practical option, the effectiveness of this treatment is optimized when somebody sneezes in your face or you finally get off of the plane after a trans-Atlantic flight. Don't wait for initial symptoms. Just nebulize at your first opportunity."