Last year, Philip Dormitzer, the chief scientific officer at Pfizer, described Israel as "a sort of laboratory" to "see the effect" of his company's vaccines. Well, it took over a year into the vaccine drive that injected most Israelis with three shots and some with four to finally publish information on adverse events. What Israel published earlier this month based on a health ministry survey of 2,049 people who got booster shots is not only damning, but unmistakably revealing that there is no way Pfizer did not see these adverse events during the clinical trials in 2020. What did they know and when did they know it?

On Feb. 10, the Israeli Health Ministry published (English version here) the results of a survey of adverse events among roughly 2,000 random Israelis who received booster shots. It's shocking that it took this long for them to conduct such a survey and didn't do this a year ago, but it's better late than never. Just the top-line numbers from the survey should alarm us all. A total of 75% of women and 58% of men reported experiencing at least one side effect within the 21- to 30-day follow-up period of the interview. Obviously, the majority of these were minor, but 51% of the women and 35% of the men who experienced a side effect reported that as a result, they had difficulty performing daily activities.

Don't miss out on content from Dave Rubin free of big tech censorship. Listen to The Rubin Report now.

Full stop right there. Even before we get into more serious problems. Just the fact that the shot knocked out such a massive percentage of people clearly violates the informed consent through which the shots were marketed and most certainly makes any mandate immoral. Right off the bat, it's clear that this is not like taking a vitamin D pill. Moreover, the fact that we have zero long-term studies, but such a massive percentage get at least a sick feeling from it in the short run should concern everyone. Again, why wasn't such a survey done in January 2021 after the first dose?

Just take a look at the massive percentage of reports, especially for females, experiencing weakness, muscle ache, shaking, high temperature, and even dizziness and vomiting. 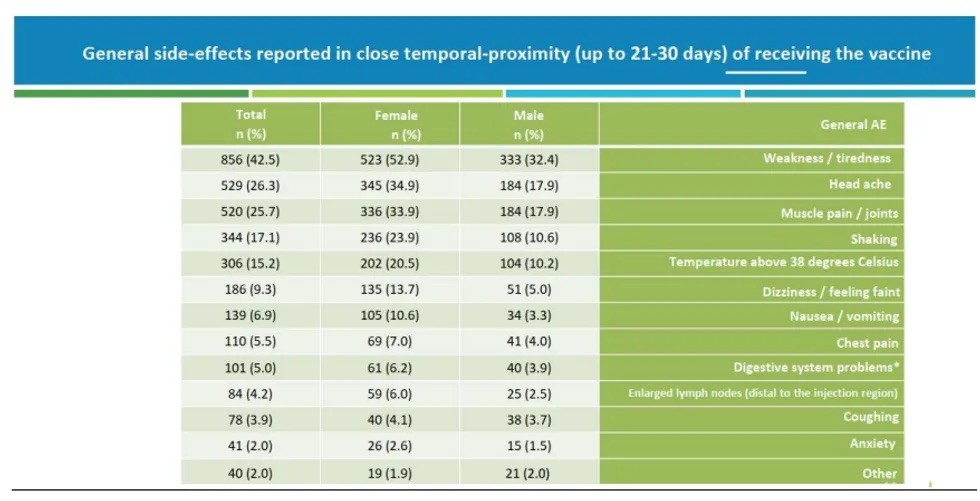 That is a massive percentage for a product ubiquitously marketed, endorsed, distributed, and then mandated by global governments as the safest and most effective vaccine of all time. And all for a virus that, with most younger people, would cause roughly the same symptoms anyway even after being vaccinated. The fact that this shot was even marketed to younger and healthier people is insane. Yes, some people might have willingly taken a shot if they thought they'd get some flu-like symptoms, but that confidence – that the flu-like symptoms don't portend more severe long-term damage – can only work for an established vaccine that already has long-term safety data.

Now, let's get to some of the more serious or potentially serious issues. The same table shows that 5.5% reported experiencing chest pain. We already know that there are major safety concerns for cardiovascular issues and that the spike protein is very pro-inflammatory and potentially thrombotic. And remember, this is 5.5% of just one dose. If you extrapolate that to America, where 551 million doses have been administered, that would be approximately 30 million cases of chest pain! It doesn't necessarily mean that it causes short-term or long-term damage, but again, with a new vaccine with a novel and dangerous mechanism of action and no long-term safety studies, how can this be allowed to continue without further study?

A total of 4.5% of those who received booster doses reported neurological side effects. Assuming the doses are all relatively the same, that would extrapolate to roughly 25 million cases of neurological side effects in the United States. It would lend a lot of credence to the military whistleblowers who reportseeing more than a tenfold increase in nervous system diagnoses in 2021 and leaves no doubt that the DOD was bluffing when it responded with "revised" data showing not even a modest increase.

There's no doubt that the spike protein of the pathogen causes nervous system disorders in some people, just like it causes cardiovascular disorders, but clearly the shots do as well, and remember they don't prevent you from getting the pathogen.

Most of the nervous system disorder reports, on the surface, don't appear to be that serious, but 0.5% reported Bell's palsy, which certainly can become very serious. If 0.5% of doses caused Bell's palsy in the U.S., that would account for 2.7 million doses!

Moving on to more serious issues, 0.29% reported being hospitalized within 30 days. That might sound like a small number, but that is a huge deal for a shot being pushed upon an entire country at once and mandated for many. Assuming the boosters aren't worse than the previous doses, that would extrapolate to 1.6 million hospitalizations in the U.S. since the beginning of the vaccines 14 months ago, and 270,000 for the boosters, which certainly harmonizes with recent German health insurance claims data, life insurance claims increases in 2021, and Medicare billing data.

Additionally, roughly 24% of people with pre-existing autoimmune disorders, and 5%-10% of those with diabetes, hypertension, and lung and heart disease, also reported a worsening of their condition. Auto-antibodies and autoimmune disorders are always a concern with novel antibody therapies, especially one like this for which the manufacturers brag about a hyper-antibody response.

Also, roughly 10% of women under 54 experienced menstrual irregularities, for which 31% sought medical attention. Delayed menstruation was the most common side effect. While we can't say definitively that this will cause reproductive issues, such a safety signal is not normal, and in conjunction with the Japanese biodistribution document from Pfizer's animal study showing lipid nanoparticles, which are pro-inflammatory, depositing in the ovaries, it is the job of the government to prove conclusively that this is not a problem, not the other way around.

And remember, this is all just a survey of the first month following the shots. There is no study on the long-term effects of micro-clotting, heart inflammation, neurological inflammation, immune suppression, antibody-dependent disease enhancement, or auto-immune disorders. We already know that the spike protein circulates potentially for months in some people.

To be clear, this is a randomized survey, not concrete proof of diagnosis. So for those "fact checkers" out there, we are not asserting based on scientific law that the shots absolutely cause X percentage of specific adverse events. But that is not our job. We are not the ones endorsing, marketing, distributing, and mandating the shots. It is their job, after multiple avenues of safety signals showing unprecedented issues, to clean up their act before even continuing the distribution, much less making it mandatory.

There is no way the public would have initially embraced the shots had they been told even the most conservative estimate of adverse events we likely experienced, not to mention the waning efficacy. Which begs the question: What did Pfizer know and when did they know it?